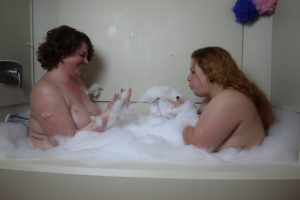 We are two women in our thirties who have been dating and doing cam and phone sex together for many years. We are both very kinky and enjoy everything from licking pussy, watching men jack off on cam to us to even exploring our submissive and masochistic side by switching off who tops who.

Both of us are easy to get along with and we enjoy our work as cam girls immensely! While Lucy has been doing this gig for a lot longer (since her early twenties), Aubrey has taken it to another level when it comes to exploring the dark and nasty. We are both very dirty girls and are very much into each other.

If you want to know more about how we met, you can read all about it here.

A few kinky fun facts about us as a duo: